Orange juice used to be a treat you had to squeeze out yourself. More than a century ago, an overproduction of oranges helped create the morning staple we know and love.

The staid carton of orange juice has long sat next to tea and coffee at the breakfast table. It’s bright, but somewhat boring, and bears the dubious halo of being something good for you. Few of us give it much thought, other than to recall its oft-trumpeted Vitamin C content.

But processed orange juice as a daily drink, you might be surprised to learn, is a relatively recent arrival. Its present status as a global phenomenon is the creation of 20th-Century marketers, dealing with a whole lot of oranges and nowhere to dump them.

In the early 1900s, Florida and California oranges vied for the attention of American shoppers. The fruits were shipped all over and eaten fresh or juiced in the home, producing a delicious honey-coloured elixir. California relied on the navel orange and the Valencia orange,; the latter was the best for juicing.

Florida, however, grew four varieties, and all of these were decent juice oranges. That meant that when, in 1909, the growers met to deal with a burgeoning problem – a glut of oranges, too many for the market to bear – juicing them, rather than curbing their production, was considered a feasible solution.

Be that as it may, oranges, juiced and otherwise, were the subject of a strenuous advertising campaign by orange interests in the 1920s, when the discovery of vitamins was a current event. Vitamin C was a perfect reason to consume more oranges. Things really got off the ground when nutrition personality Elmer McCollum popularised a mysterious ailment he said resulted from eating too many “acid-producing” foods, like bread and milk: acidosis. 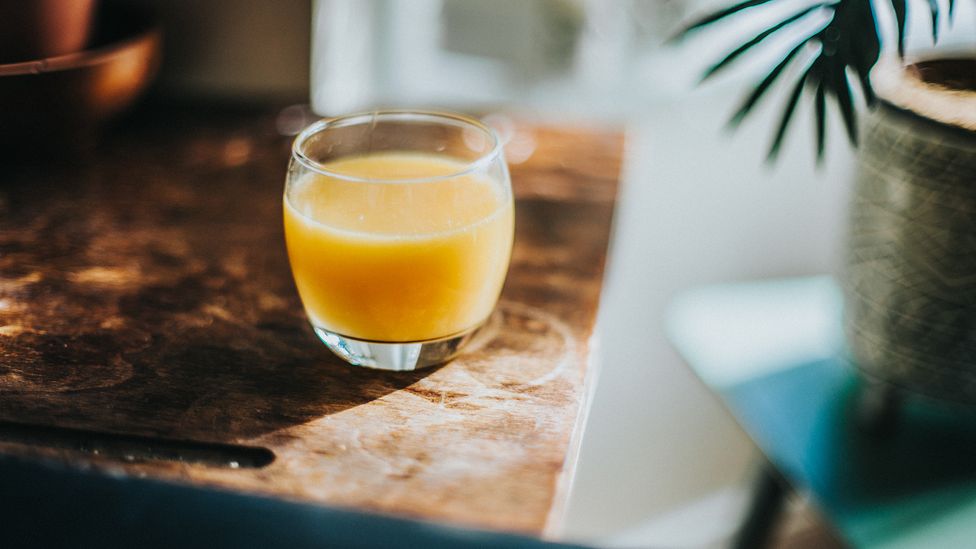 Orange juice was, until relatively recently, only something you could enjoy at home if you squeezed the oranges yourself
(Credit: Catherine Falls Commercial/Getty Images)

In fact, true acidosis, which has a variety of causes, cannot be remedied by eating lettuce and citrus, as McCollum claimed. But that didn’t stop the imagination of the citrus industry from taking advantage of this new fear. Adee Braun, in a story for the Atlantic, quotes from a Sunkist advertising pamphlet:

“Estelle seemed to lack vitality; didn’t even make an effort to be entertaining; hence, she did not attract the men…’ ‘Acidosis’ is the word on almost every modern physician’s tongue.”

“The cure was simple: Consume oranges in any form and at every possible opportunity,” Braun writes. “And Sunkist assured the acidosis-fearing reader that it was impossible to overindulge in oranges.” The focus soon got back on vitamins, as doctors pushed back against these ideas, but the will to embrace any whimsy in the service of oranges was there.

Juice was still canned at this point in its evolution and far from popular. But the government, especially the Florida Department of Citrus, was willing to invest in experimentation. The US Army’s World War Two search for a form of citrus that soldiers would not surreptitiously jettison from their rations led to a research program into palatable orange juice. Trying to condense orange juice like milk led to memorably bad results. “High temperatures burned off its shine and produced a viscous and brownish mixture that lacked fresh flavor [sic],” writes Hamilton, the historian. But evaporating some of the water under pressure, mixing a portion of fresh juice back into the concentrate, then freezing it, was more successful. The fresh juice rescued the funky concentrate. It produced something worth drinking, if still a far cry from the undiluted fresh version.

If juice could be kept in stasis, held in waiting for a consumer’s glass, then the only problem was ramping up demand as much as possible

The innovation arrived as Florida growers were dealing with cyclical, massive overproduction. The promise of a new way to make juice that could be kept frozen, then reconstituted in people’s homes, prompted them into even more production, however. They ramped up tree planting in the 1940s. The oranges went to frozen concentrate and eventually, to chilled juice, an industry term for the refrigerated product. If juice could be kept in stasis, held in waiting for a consumer’s glass, then the only problem was ramping up demand as much as possible.

It did not matter that this juice was different from a glass of truly fresh-squeezed. When John McPhee checked into a Florida hotel for a reporting trip more than 50 years ago, he discovered that even in the heartland of oranges, fresh juice was a dim memory. 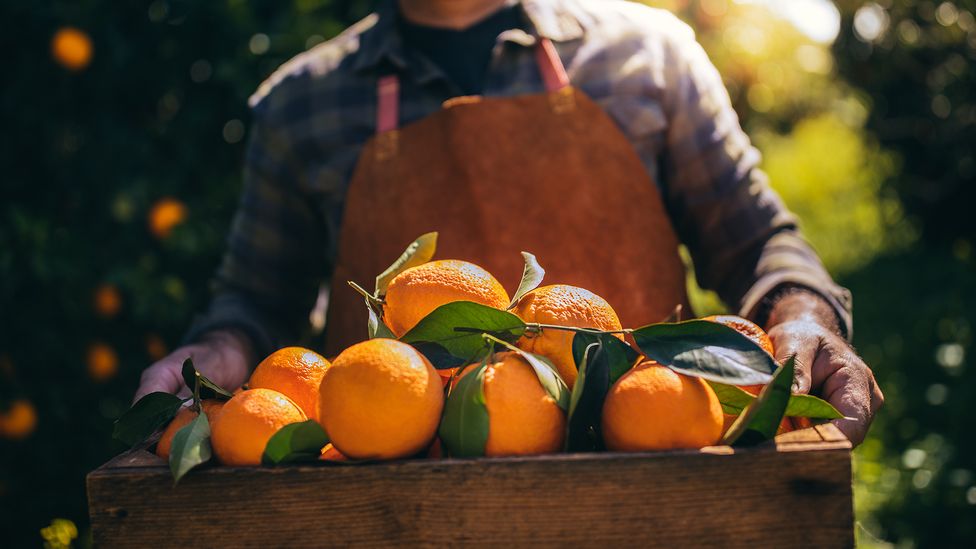 “Next door was a restaurant, with orange trees, full of fruit, spreading over its parking lot,” he wrote in his book Oranges. “I went in for dinner, and, since I would be staying for some time and this was the only restaurant in the neighborhood, I checked on the possibility of fresh juice for breakfast. There were never any requests for fresh orange juice, the waitress explained, apparently unmindful of the one that had just been made. “Fresh is either too sour or too watery or too something,” she said. “Frozen is the same every day. People want to know what they’re getting.” She seemed to know her business, and I began to sense what turned out to be the truth – that I might as well stop asking for fresh orange juice, because few restaurants in Florida serve it.”

Packaged orange juice only gained in popularity as companies began to add “flavour packs”, oils and essences that could be added to old juice to give the taste of fresh. While this practice led to lawsuits about whether the resulting product could be considered “natural”, by this time US consumers were used to the taste, convinced of the need for orange juice to accompany a complete breakfast, and out of practice at juicing. Busy 20th-Century lifestyles also saw a broader shift towards convenient foods that didn’t require much preparation, which may have helped the appeal of packaged juice.

It had taken a few decades, but with the help of advertising and processing technology, the dumping ground for extra oranges was solidly ensconced as its own product, far outpacing oranges themselves in sales.

“On any given day (with oranges and tangerines together), 5% of Americans will consume a fresh orange,” concluded a USDA report from 2003. “21% will consume orange juice.”